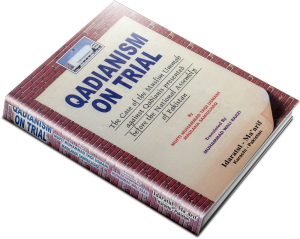 The Qadianis or the followers of Mirza Ghulam Ahmad of Qadian have been presenting themselves as Muslims or as a sect of Muslims to the world for a considerably long time. The Ulama (scholars) and the doctors of Islam from all the sects of Muslims met the challenge and declared them non-Muslims quite early in this century when Mirza Ghulam Ahmad of Qadian made his claim to prophet hood, plenty of valuable literature came into existence on the subject which effectively refuted all the arguments presented by the Qadianis, and, in addition, disclosed their secret political and social relations with anti-Islamic forces of the world.

As the Qadianis were not officially declared a separate Community by the Government, they took advantage of using the cover of Islam for preaching their false beliefs to the people of African and European countries. They also succeeded in maintaining their missions in various countries through some of their agents possessing ministerial ranks in the Government of Pakistan, thus endangering the political stability of Pakistan on the one hand and converting the people to Qadianism in the name of Islam, on the other.

Various anti-Qadianis movements were launched by the people of Pakistan to get them officially declared a separate religion but they could not achieve their object owing to so many political reasons. At last the recent movement of 1974 produced positive results, Thirty seven members of the National Asembly of Pakistan moved a resolution in the Assembly demanding constitutional declaration of their being a non-Muslim minority.

Consequently, the case of the Muslims was presented before the National Assembly of Pakistan, and both the groups of Qadianis, that is, the Ahmadi Jama’at of Lahore and Qadiani Jama’at of Rabwa and Qadian were also invited to plead their case. At this juncture, the members of the National Assembly who had moved the resolution requested the Prominent Ulama of the country to prepare and compile an authentic and comprehensive statement comprising religious, political and social aspects of the new religion. The present book in order to meet this request, Maulana Muhammad Yousuf Binnori invited me to draft the religions part of this book, and Maulana Samiulhaq to draft its political part. This joint effort was then presented before the outstanding members of the parliament who had moved the resolution. After their review and approval, it was submitted to the special session of th_ Assembly in an impartial close study of various aspects of Qadianism.

The book, in hand, provides us with a valuable treasure of extracts and references from the original basic literature of Qadianis. On the basis of authentic contents of the book the Qadianis, at last. were constitutionally declared non-Muslims on 7th Sept. 1974.

In view of effectively useful material of the book the Research Department of Darul Uloom requested Mr.Muhammad Wali Raazi to translate the Urdu book into English for the benefit offoreign readers, I owe my thanks. to Mr. Muhammad Wali Raazi who with competence and proficiency rendered the book into English and thus enabled us to present this to our brethren of Islam living abroad. May Allah accept this humble effort and may it be useful for those who are the seekers of the Truth.

Tweets by muftitaqiusmani
Go to Top